The Tattoo is always looking for talented teens!

We knew it couldn't last. The school year has gone on a long time without some horse's ass masquerading as a principal taking a whack at the First Amendment.
But William Orr, principal of Tampa's Hillsborough High School, managed to step into the gap and earn his position in our Halls of Shame recently.
According to the St. Petersburg Times, the most recent issue of the school paper, Red & Black, has "a gaping hole on page 3" and a note stapled to the each copy saying the missing piece was "deemed inappropriate."
Mr. Orr, of course, did the deeming.
Was he axing some juvenile humor? No. A sickening invasion of privacy? No. A hideously reported and probably libelous story? No.
Instead, he took a razor to Editor-in-chief Emily Matras' piece on the sadly dramatic divide between white and minority student achievement on state standardized tests.
According to the St. Petersburg paper, her article "used government-provided numbers on Hillsborough High students" and also mentioned that test scores are linked with income nationally.
The story even quoted Mr. Orr "on the complexities of the issue and the school's efforts to 'raise the achievement of all students,'" according to the St. Petersburg Times.
Mr. Orr refused to let it run.
He told a St. Petersburg reporter that the barred news item had "a potential to hurt students' self-esteem."
"I don't think it's the job of the school newspaper to embarrass the students," he said.
I suppose, too, that the Red & Black should not report when the school's athletic teams lose, since God knows that can be embarassing as well.
Mr. Orr seems to have a reality problem. The scores are what they are. Erasing them from print doesn't change the facts.
And who was he really trying to protect from embarassment? Students? Or the principal whose school isn't doing well enough in educating minority students?
What's truly embarassing is not that Hillsborough students have the same test achievement gap that hits too many schools -- mostly for reasons beyond the control of educators. It's that it has a principal without principles.
Mr. Orr, read the First Amendment and ponder what it means. If we can't tell the truth about what's going on, whether it's in Washington or Hillsborough High, then we're not free.
We'd like to think Mr. Orr's idea of protecting "self-esteem" by keeping facts at bay doesn't even begin to approach the proven value of a free press.
So hold your head high, Mr. Orr, and walk proudly through our Halls of Shame. You've earned your place.
And to the student journalists at the Red & Black, keep trying!

In the hustle and bustle of the past two days, I forgot to post here that we have a new issue online now.
It features a news story by Rachel Glogowski about the mysterious deaths of a family of ducks at Bristol Eastern High School; the first of what we hope will be a series of journals about getting braces, by Wesley Saxena; Josh Gales' account of going to the X Prize Cup this past weekend; and Billy Knox's review of a must-see movie, "The Green Mile."
Don't miss it! 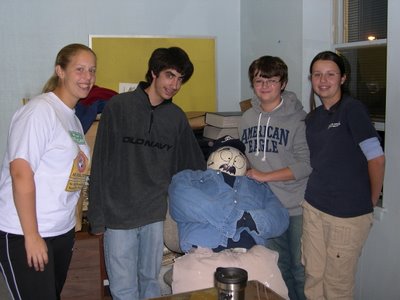 A talented Tattoo crew consisting of Beth Pond, Justin Skaradosky, and Ryan and Rachel Glogowski patched together a "Couch Potato" scarecrow for the first-ever Forestville Village Association Scarecrow contest held Saturday. The Couch Potato got many laughs and won second place in the 'most original' category. Much fun was had by all. Below are some pictures from the contest: 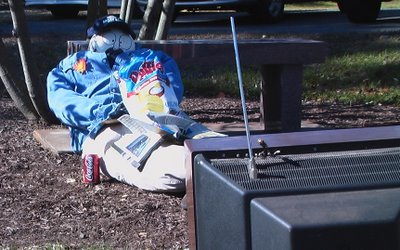 "Couch Potato" on the scene at the scarecrow festival. 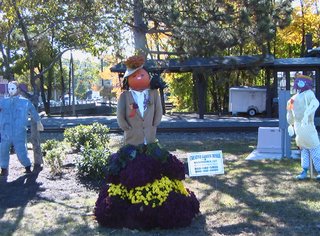 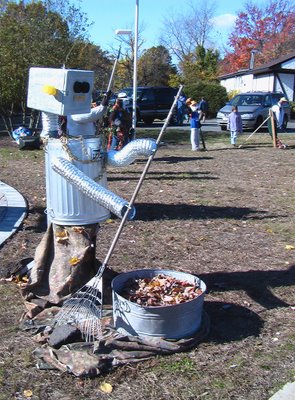 The robot scarecrow that, deservedly, captured the 'most original' category. 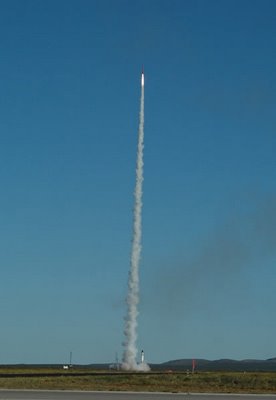 Tattoo writer and photographer Josh Gales ventured to New Mexico for the X Prize Cup this weekend, where he saw astronaut Buzz Aldrin, rockets firing off into the sky and a host of marvels. You can read his account of some of his adventures at www.ReadTheTattoo.com
Above, by the way, is his picture of a Tripoli rocket blasting off. Below is a picture of Josh in the cockpit of an Albatross. 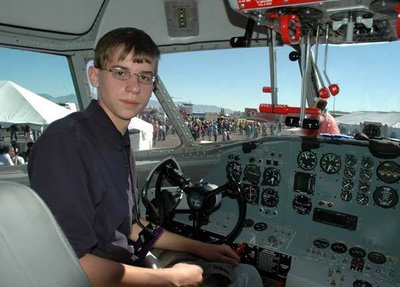 One of the world's bravest and best journalists, Anna Politkovskaya, a special correspondent for the Novaya Gazeta newspaper in Russia, was shot in the head by an assassin today outside her apartment. It appears that one of her enemies put out a contract on her life.
Ms. Politkovskaya, 48, brought news to the world of the nightmares in Chechnya, a Russian province that's been ripped asunder by war for more than a decade.
She was an outspoken hero in the human rights movement that has helped so many to freedom across the globe, including her own land.
Mikhail Gorbachev, the former Soviet Union president, told the Interfax news agency that her death “is a blow to the entire democratic, independent press. It is a grave crime against the country, against all of us.”
All of us, indeed. Not just her fellow Russians, but all who care about freedom and the press have suffered a blow.
She should have had many, many more years. 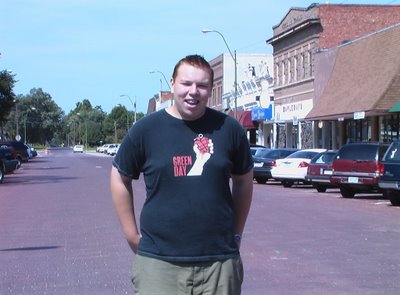 Zach Brokenrope, standing in the middle of Aurora, Nebraska's main street downtown.
Okay, we know we promised a full report on our August trip to Aurora. We'll get to it soon. We promise. Meanwhile, here's a picture of our intrepid Tattoo reporter risking his life in the heavy traffic of downtown Aurora on a weekday morning.
Watch for more. It's coming. 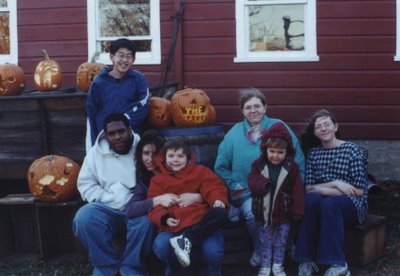 Back in October 2000, The Tattoo joined in a pumpkin carving contest at Bristol's wonderful Roberts Orchard. Though we weren't the best, as anyone can see, we came away with a prize of some sort. It was a fun time for all. And my how things have changed since then. Merissa and Jason are married and living in the great Southwest. Sarah's graduated from UConn. Mikey's nearly done with his studies at Boston University and Katie's a sophomore at UConn.
Kiernan and Mary, well, they're a lot bigger.

Voice of America reporter Ted Landphair took note of The Tattoo's own Samantha Perez's words in his report to the world from St. Bernard Parish, Louisiana. Check it out at:

Katrina-Ravaged St. Bernard Parish Far From 'Up and Running'

Steve Collins has covered government and politics for The Bristol Press since 1994. Before that, he was a reporter and columnist for six years for The Citizen, in Auburn, New York. He is co-founder of The Tattoo teen newspaper, online at www.ReadTheTattoo.com, and Youth Journalism International, a 501(c)(3) public educational charity serving young people across the globe. He has a B.A. in history from the University of Virginia. He is married and has two school-age children.

This blog is intended as an aid to readers, staff and alumni of The Tattoo. The Tattoo is always eager to find talented teens who are interested in journalism.

"If you want to see into the minds of today's bright and funny young thinkers, spend some time with this Bristol-based publication. You can get a teen's -eye view of world politics, teen pregnancy, teen suicide, local events and sex."